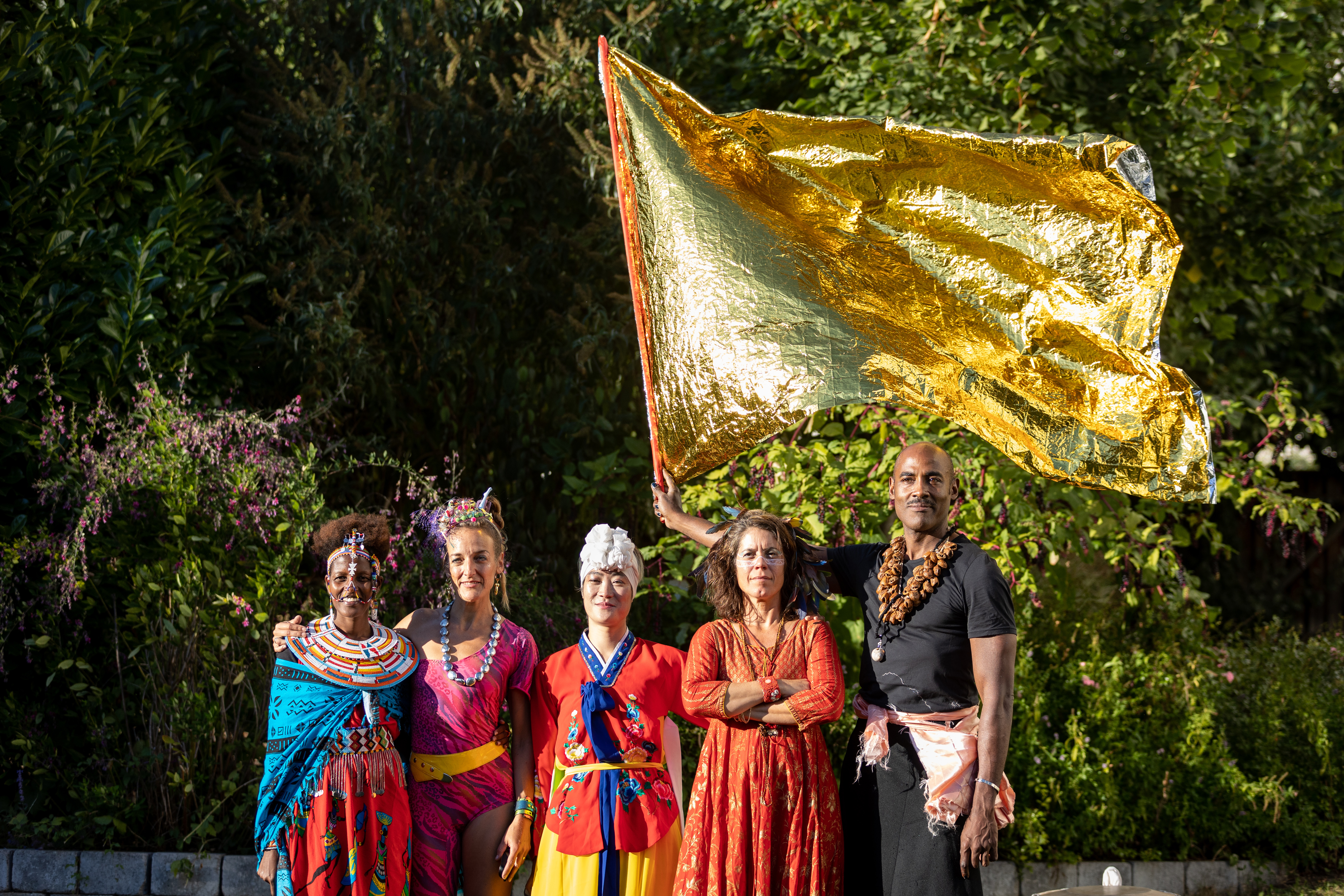 The Daily Rhythms Collective works across disciplines, cultures and territories; performing, exhibiting, publishing, debating and raising voices of co-existence that are aligned with decolonial feminisms, and engaged with regenerative cultures.

In 2021, the Daily Rhythms Collective constituted a new artistic formation to focus on Ancestral-Futuristic and Spiritual Aesthetics as an emancipatory form of healing  – from the colonial wound and relationships shaped by patterns of domination and exploitation. The current members are dedicated to researching their personal biographies and journeys through associative thinking and entangled stories, which are translated into a collaborative artistic practice  – towards wider forms and temporalities of belonging, between rootedness and rootlessness.
Through this, we embrace post-activism, i.e. we engage with the painful process of becoming aware of our own responsibilities/ how we are implicated in the current social and ecological crisis – at all levels, while moving out of the anthropocene. Humans are not the drivers of change. How to flow and become – sympoetically and with the trouble?

The collective was founded in 2013 and it is based in Graz, Austria. The main intention was to create spaces of coexistence and empowerment in the local contexts, for which various workshops, exhibitions and interventions in public space were conceived and developed. The Daily Rhythms Collective initiated The Weave Salon in 2015 and was part of the founding group of the Women’s Action Forum (WAF) in 2018.

Daniela Brasil (artist, activist, curator, educator, researcher)
born in Rio de Janeiro, Brazil in 1975, studied Architecture and Urban Design in Rio de Janeiro, Environmental Urban Design in Lisbon and Barcelona and Social Sculpture in Oxford, and received her MFA and PhD in Artistic Strategies for Public Participation from Bauhaus University Weimar. Residing in Graz since 2010, she was a lecturer and researcher at IZK/ TU Graz from 2011-2018 and has been a member of Daily Rhythms Collective and Neuberg College – Association for Translation of Society since 2015. She is on the advisory board of the <rotor> Centre for Contemporary Art and works with the Ecoversities Alliance as well as with InRiCo – Indigenous Rights Collective Graz. Her focus is on transformative and emancipatory learning processes, especially in the context of subaltern knowledge and endangered cultures.
http://www.koenigbrasil.net/

Peninah Namunyak Lesorogol (designer, journalist, cultural ambassador, activist)
born in Naiborkeju Village, Samburu, Kenya in 1986 into the Samburu People tribe (also known as Butterfly People), she studied International Travel and Tourism at the Air Travel and Related Studies Centre in Nairobi and worked in this field in the Masai Mara Conservation Area and in Nairobi before coming to Graz, Austria in 2015 and founding her first women’s empowerment project Samburu.at, for which she has since worked as a designer and executive director. In parallel, she works as a journalist for Radio Helsinki Graz for the European project “Snapshot from the borders” and shares indigenous spiritual knowledge and perspectives as a cultural ambassador in Austria and her cosmovision in Kenya in projects such as agri-cultural reforestation. She uses her knowledge of sacred rituals in a performative way.
https://www.samburu.at/

Otto Oscar Hernández Ruiz (painter, performer)
Born in Havana, Cuba in 1976, Otto Oscar Hernández Ruiz received his diploma in architecture from the University of Havana, where he worked as an architect until 2002 before taking up art studies at the Bauhaus University in Weimar in 2004. Since then he has worked interdisciplinarily in painting, drawing and performance. He is primarily interested in the construction and deconstruction of his own perception of the (surrounding) world. His works repeatedly deal with the current understanding of landscape painting, how textures and colours unfold different moods, how a complex spatial structure expresses itself.
https://www.ottooscarhernandezruiz.com/

Hyo Jin Shin (musician, performer)
Born in Seoul, South Korea in 1977 and immigrated to the FRG in 1981, SHIN Hyo Jin graduated from the Berlin University of the Arts and the Free University of Berlin as a teacher of music and biology. Since her youth she has also studied traditional Korean music and performance with various Korean masters and teachers. Since 1994 she has been performing these in various ensembles and working in parallel in experimental, inter- and transcultural and mostly interdisciplinary music and performance projects. Together with her collaborators, she searches for diverse ways of developing contemporary expression from traditional sources.
http://ensemblesu.peter-ehwald.net/
https://www.facebook.com/EnsembleSu/
https://www.facebook.com/KoreanPerformingArts